Throughout the Victorian period, legislation prohibited “games of chance” ( i,e. gambling ) in pubs. In 1908 a pub owner, named Anakin in Leeds, was taken to court for permitting darts to be played in his establishment, and he offered to prove that darts was a game of skill. A board was set up in the courtroom, and  Anakin threw three darts in the 20 and then challenged any of the magistrates to duplicate his feat. When they could not, the court was forced to accept that darts was indeed a game of skill, not chance, and the laws were eventually changed. From the turn of the century to WW2 darts grew in popularity as a pub game and a National Darts Association was formed in 1954.

In spite of the WW2 having been declared in September, darts were still being played in the District, and a report in the Express in October 1939 showed a league table for the Huddersfield & District Darts League with Clothiers laying 2nd. out of 16 teams having played 6 , won 4, drawn 4 with only one loss. This was the first report that I could find of this league. By November the Clothiers were top of the table after 10 matches. However, by February 1940 , they had slipped right down the table and were  9th. having 7 losses. There were no further reports but it appeared that the Clothiers were still playing in October 1940.

The next report was in March 1941, which said that the Clothiers were back in the League  which now had 11 teams. They were 4th. having played 132 games, winning 69, losing 61 and drawing 2. All very confusing as this league season  must have finished and  then, sometime before  August, a new season started. It was reported that the Clothiers had two teams in the new league of 12 teams, the A team were 2nd. and the B team in 6th. position. By November the Clothiers A were on top with the B team 7th. The next newspaper report was in January 1942  when, after 17 weeks and 119 matches, Clothiers A remained top of the table with 75 points  and the B team had dropped further down with 50 points.  In the final league table, after playing 154 games  , the Clothiers A topped the league with 101 points, the B team scoring 59 points.

In recognition of their success, three members of  of the winning team were awarded the League Championship Prize from the Holmfirth Darts Association for the season 1941/42. They were R. Hallas, W. Armitage and J. Braid. 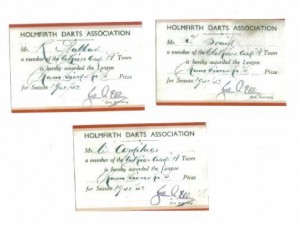 Certificates issued to three of the members of the Clothier’s winning dart team for 1941/42. The Monthly meeting of the Holmfirth Darts Association was held in July 1942 in the Clothiers and reported on a record season.

In January 1944, the League consisted of 11 teams and the Clothiers were in 9th. position. Among the players who regularly turned out for them were – W. Scurrah, R. Hall, S. Hepworth, J. Roebuck, J. Horncastle, B. Dollive, W. Morley and E.  Thornton. By the 19th. week of the league ( March ) , the Clothiers had dropped to last place having only scored 43 points from 119 games. That was the last report for the season but in November 1944 the new season started with 15 teams. The Clothiers were in 3rd. position by the 7th. week but had dropped to 11th. by the end of the year. The team members were J. Roebuck, S. Hepworth, T. Swallow, E. Coldwell and L. Davies. By April 1945, after the 23rd.week of the season, the Clothiers were in 10th. place and the team consisted of  L. Davies, R. Hall, H. Swallow, W. Leake and S. Hepworth. Unfortunately they were the losing finalists against the Crown Hotel in the Holmfirth Darts Association Knock-out competition in August. The new season started in September, and by December the Clothiers were 8th. of  16 teams having scored 34 points out of a possible 65. There were no further reports in the Express for the rest of the season but it would appear the  Clothiers had not fared too well as at the start of the new season in September 1946. There were two leagues, A &B , and they were 5th. in league B.

The final league table for Section B in April 1947 showed the Clothiers came 7th. out of 11 teams and from a possible maximum points of 140 they obtained 70. At the start of the next season in October, the Clothiers were in Section A which comprised nine teams.  That season ended in February 1948  and they finished 5th. having scored 52 points out of a maximum of 119. The winners were the White Hart, New Mill, and the Royal Oak , Thongsbridge. In June they entered in the Rose Bowl Competition organised by the Holmfirth Darts Association and the team members were R. Hall, S.Hepworth, John Roebuck and W. Leake.  They were not registered for the new season in October.

The start of the new season for 1962 was in September, and the Clothiers entered a team in Section B. By December they were 5th out of 15 teams having played 13, won 8 and drawn 1. They were led by Keith Hollingsworth and Keith Knutton and by the end of January had climbed to 4th. behind The Prince of Wales, The Railway and Honley Social. In a couple of top-of-the-table clashes they beat the Railway by 4-3 and overpowered Honley social by 5.5 – 1.5 and reached the dizzy heights of 2nd. place. Their final table position at the end of the season was 3rd. behind the Prince of Wales and the Railway having played 30 matches winning 22 and drawing 2. The AGM of the Darts Association was held in the Crown Hotel in May, and a number of new rules were adopted. The new season started on September 2, 1963 and 35 teams were entered into two leagues with the Clothiers having an A and a B team. After the first 5 matches, Clothiers A were second behind Victoria but had dropped to 4th. after 12 matches. In the team K.O. tournament the A team reached the semi-final but lost to the Red Lion by 1-6. At the end of the year the A team were 3rd. and the B team 13th out of 17.

When the league started again in October 1967, the Clothiers entered two teams and, for the first time, as far as my knowledge goes, the Cricketers entered a team. The registered players for Clothiers A were Doug Haigh, Den Haigh, D. Greaves, J. Heppenstall, H. Brook, J. Williamson, K. Hollingsworth, N.  Ellis, D. Schofield, G. Swain, P. Heald and J . McLochlan. Those registered for the B team were M . Edinbro, S, Haigh, R. Gale, D. Stangroom, H. Scholfield, G. Scholfield, R. Haigh, S. Scholfield, S. Longley, B. Gray, A Hirst and Mrs. J. Hepponstall. The Express did not give any names for the Cricketers team. At the end of December the two teams from the Clothiers were placed 16/17 and 10/17 with  the Cricketers only faring slightly better at 9/17.

In the 1976/1977 season,  Clothiers and Cricketers both entered a team each and were put in Section 2. Throughout the season they were neck and neck at the top of the table, and the final tables in April 1977 showed they had both played 22 games  and won 16 for a total of 32 points. The table listed the Clothiers first and the Cricketers second but, as they had scored the same number of points, the Clothiers was put first alphabetically. A measure of the popularity of darts teams in the pubs and inns was that 50 teams had been playing in four sections. At the resumption of the new leagues in October 1977, the Clothiers were in Section A and the Cricketers in Section B and by the end of the year, after six matches, the Clothiers were bottom of their section with one point, with the Cricketers, still to score a point, faring even worse. Neither team showed any improvement during the rest of the season and the final results showed that the Clothiers came 11th. out of 12 having played 20 and winning five. The Clothiers did manage to  win four of their 20 games but still came last. I only came across one report but, it appears that, during the same season, the Clothiers entered a team in the  Meltham League playing darts and dominoes and in the final table the Clothiers came 4th. having played 18 and winning 14. Their Dominoes team fared less well coming 9th. out of 10 , playing 18 matches and winning 8.

At the start of the 1978-79 season, the village only had one team and that was the Cricketers who played in Section 3 of the League. The season finished in April  and they came 7th. out of 14, having played 20 games and winning 13.

This site uses Akismet to reduce spam. Learn how your comment data is processed.