In the late 1600s, foot –racing was extremely popular and normally took place on the highways. Its growth continued, and in 1859 Honley converted its cricket field into one of the finest tracks for foot-racing in the North of England. Athletes came from all parts of the country to compete and champions were objects of hero-worship. It attracted great crowds  and large sums were wagered. In 1864 the race-track was closed and another one was opened in Oldfield, but it didn’t stay in existence very long.

At the Crosland Moor Annual Sports in June 1890, Ben Shore of Netherthong, with a 26 yards start, won first prize, a marble clock. In the 400 yards handicap. F. Gill was one of the competitors in the mile flat race.

The Netherthong 10k race is an annual feature on the calendar and from the comfort of my house I can watch each year as the athletes race down across the fields,  join  New Road, disappear, and then return some time time later and struggle back up the fields. . The start and finish is at the Clothier’s Arms. See photo below. 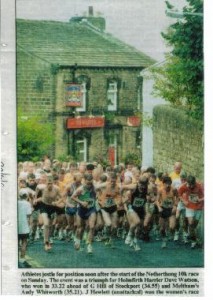 The start of a Netherthong 10k race
In November 1964, Mr.Edgar Whiteley aged 80 years died at his home in Leas Avenue. In conjunction with the late Mr.A.Seddon, he had founded the Holmfirth Harriers Athletic Club in 1907. A life member of the Harriers his name is perpetuated by the ” Edgar Whiteley ” Trophy which is competed for annually. As a young man he was well known as a sprinter,  won prizes valued at over £200 and was a regular competitor at the Holmfirth Flower Show Sports, where for many years he was a ” scratch ” man. He also played football and cricket. In complete contrast, he was one of the founders of the Holmfirth Branch of the National Federation of the Old Age Pensioners’ Association.

This site uses Akismet to reduce spam. Learn how your comment data is processed.